This page is about Electrical Fridge Freezer Fires.

Could your fridge Freezer burn your house down? You can’t switch them off. They’re packed with inflammable insulation that can give off toxic gas. Here’s why they can be the most dangerous appliance of all… 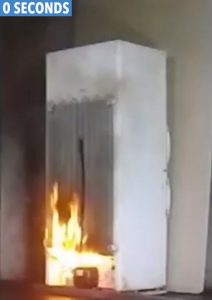 Shocking footage shows how quickly the fire can engulf your kitchen Flames are shown quickly spreading up the back of the appliance After 30 seconds, the flames have already taken over the back of the fridge freezer After 90 seconds it has burst into a huge fireball

They can burn extremely quickly!

When fire ripped through Grenfell Tower flats this year killing 71 people, injuring hundreds and leaving residents with nothing but the clothes they were wearing.

So where did this rampant blaze start? The fridge-freezer, said fire fighters. Indeed, this most basic of household appliances is where hundreds of house fires start every year.

Fire crews thought they had put out the blaze at the tower when they saw flames rising up the side of the building.

The flammable cladding on the tower has been blamed for the rapid spreading of the fire, which has killed 71 people.

In the past five years, London Fire Brigade has attended at least one blaze every week — 260 in total — involving fridges and freezers. These have led to 71 serious injuries — and seven deaths.

London Fire Brigade is now lobbying the industry to make these ‘most dangerous of all household appliances’ more fire resistant by replacing some of the more flammable materials found in them.

Although other domestic appliances can ignite — with the press previously highlighting the dangers of washing machines left running overnight or when owners are out during the day — the Fire Brigade says that fridge-freezers pose a particular danger.

This is because they contain large amounts of plastic and a highly-flammable insulation which, when ignited, causes fires that spread quickly, giving off toxic gases.

Although doors and side panels of most fridge-freezers are covered with metal, many manufacturers still use flammable plastic backing, which offers little protection against the insulation catching fire.

Add to that the fact that the usual precautions of switching appliances off at the plug at night and before leaving home is impossible when it comes to fridge-freezers, which must be on at all times to be effective, and you have a potentially lethal mix.

How we can minimize the risk

Every year there are many recalls on various models of fridges and freezers, We recommend fitting smoke alarms, testing them weekly and closing all internal doors before going to bed. This can contain a fire in one room for up to 30 minutes. Also, you should periodically check online to see if any of your electrical goods are subject to a recall.

But for families wanting to avoid a similar risk, it’s not as simple as deciding not to buy certain brands as many use components produced by the same manufacturers in their machines. Of the 855 electrical fridge freezer fires recorded by the fire and rescue services, more than a quarter of the appliances were so badly damaged it was impossible to determine their make.

As there is no central registered for recalled appliances, manufacturers rely on customers registering their details when they buy an item.

If they don’t there is no direct way to contact a customer and many find out about unsafe items by reading about it in the media.

Worryingly, only 10 to 20 per cent of items that are recalled are ever returned or repaired, according to Electrical Safety First.

You can check if your appliances have been recalled using a tool on the Electrical Safety First website You’ll need the model number and manufacturer.